When Formula Ford started in 1967, Lotus was prepared. Their Type 51 was the first car introduced for the formula. Other constructors quickly followed - Alexis, Macon, Merlyn, Royale, Titan, and a slew of others - but in the early years no other Formula Ford constructor had remotely comparable resources or such a gilded reputation. So it should be no surprise that Lotus sales were brisk... for awhile. Although Lotus was quickest off the mark, it wasn't long before their success in Formula Ford faltered. Lotus continually updated and improved their product, and how they marketed it, but to no avail. In just four years Lotus dropped out of building Formula Fords altogether.

Eight distinct Lotus Formula Fords model designations exist: 51, 51a, 51b, 51c, 61, 61M, 61MX and 69, and total production tallied up to almost three hundred cars. Lotus 51 and 61 series Formula Fords are all cut from similar cloth, and the more specific model designations merely define stages in a continuously evolving progression. On the other hand, the Type 69 is distinctly different: much more elaborate and expensive by design. Only about twenty Lotus 69 Formula Fords were built.

In an earlier article, we presented a Lotus 51c's design and construction in detail. Here we'll look at a particularly original 61MX and see some significant design differences. The most obvious difference between 51 series and 61 series cars is definitely styling. The 51 was basically shaped like a cigar. For the Type 61, Lotus instead made a styling decision to mimic the wedge shape of their famous Type 56 turbine-powered Indycar. 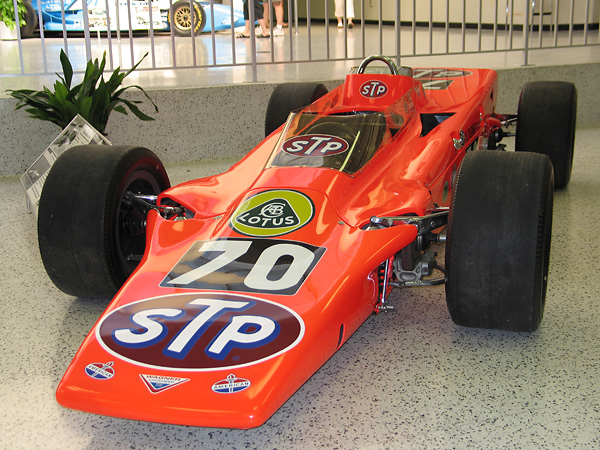 
Regretably, the wedge shape simply didn't work in Formula Ford. The new body proved less streamlined and also larger in cross-section than its predecessor and indeed most competitors. Furthermore the new body hampered cooling system performance. Customers tried to rectify this by cutting all sorts of vents in the bodywork rearward of the radiator. Lotus even mailed out specific instructions with sketchs and dimensions showing how best to improve the size and profile of a factory-cut vent under the 61's nose. (Forsooth, under the nose!)

It therefore shouldn't be a surprise that the main differences between the original 61 and its M/MX variants are aerodynamic fixes. The one-piece nose/cowl was redesigned lower and then lower again (ultimately ~4" lower at the firewall.) On the MX, the engine cover was finally just taken away. Many savvy customers had already found that 61s were faster without their engine covers. Just what made the 61MX different from the 61M? The most certain answer is that an "X" was added to the chassis plate and the code "F3" (for Formula Three) was inscribed in the space where "FF" rightfully belonged.

We must pause now to explain (a) that the 51c was a transition model and that (b) most 51c cars were exported to the United States, whereas exports of the 61 were temporarily held back. In point of fact the 51c and the first generation of the 61-series were built concurrently, and under the skin there are substantial similarities. Compared to the earlier 51-series models, these frames were quite noticeably stiffer due to several added tubes and improved triangulation. See photos and captions below. The 51c and the 61 series also shared an improved rear hub carrier (now reversible left to right), stouter rear brake calipers, and an improved trailing link arrangement.


Enjoying this article? www.BritishRaceCar.com is partially funded through generous support from readers like you!
To contribute to our operating budget,  please click here and follow the instructions.
(Suggested contribution is twenty bucks per year. Feel free to give more!)

One of Lotus' strengths was their strong network of suppliers and potential commercial partners. For example, during Type 61 production Lotus included Ford Kent engines that were prepared for racing by Holbay Racing Engines. Lotus guaranteed that "Lotus-Holbay" engines would produce within two percent of 105bhp at 5850rpm. Maximum torque output was rated 108lb-ft at 4400rpm. Incidentally, Holbay also provided performance engines for Lotus to offer in Lotus Seven S3 SS sportscars.

Chassis 61MX/F3/214 was originally sold by Lotus Racing Ltd. to an American racer who campaigned it for several years in Sports Car Club of America races. The car is a unusual in that serial numbers stamped into the frame, on the chassis plate, on the engine cover, and on the Hewland gearbox all match original factory records. It is believed by its owner to be one of the most "original" Type 61s in existence. 61Mx/F3/214 was restored by Bill Dolson Racing and is now maintained by Powerslide Motorports. It's owned and enthusiastically vintage raced by Kyle Kaulback.

Holbay Racing Engines was founded by John Reid in ~1958. The name "Holbay" came from their location
on Hollesley Bay. It would be largely correct to characterize Holbay as a direct rival to Cosworth in racing
classes below Formula One. Holbay offered performance parts of their own design for Ford engines
including Lotus Twin-Cams, high end engine building and tuning, and engineering services for quite a
diverse and prestigious list of race car teams and manufacturers including especially Brabham, Lotus,
and Fiat. Holbay still exists, but is a shadow of itself since the untimely death of John Reid in 1992.

The name "Loyning" stamped into this intake manifold indicates that this engine was once rebuilt by
Arnie Loyning of Portland Oregon. Loyning has been a premier FF engine builder since about 1976.

Pace Products is one of the handful of companies that manufactures the special dry sump oil pumps
used on Formula Fords. Other companies, including car constructors, have put their names on Pace
pumps for marketing purposes. Pace was founded by ex-Lotus Chief Mechanic David Lazenby after
his own Formula Ford manufacturing business, Hawke Racing Cars, failed.

At the inboard side, simple bushes in lieu of Heim joints also trade tuning ease and accuracy for
cost and durability. From the early 1970's, most Formula Fords came standard with Heim joints.
In the 1980s, Teflon fabric-lined Heim joints would become widely available. These new products
proved a good value because they greatly improved service life.

Type 61 steering racks mount on vertical bolts. They can be shimmed up or down to eliminate bump steer.


Enjoying this article? www.BritishRaceCar.com is partially funded through generous support from readers like you!
To contribute to our operating budget,  please click here and follow the instructions.
(Suggested contribution is twenty bucks per year. Feel free to give more!)

Upper rear trailing links are mounted over four inches higher on the Lotus 61
compared to where they had been on the original Lotus 51.

Girling 14LF MKI brake caliper. These are stouter than the 12SP calipers fitted on the rear of
previous Lotus Formula Fords and most competitor-built cars. Mounting lug spacing between
the two caliper types are different.

Lotus worked with Hewland to optimize transaxle side plates for their chassis configuration.
The Lotus 69 would be very different in this area; its frame didn't extend beyond the halfshafts.

Arch Motors stamped their serial number on the frame here. It reads: AM214.

When Heim joints aren't mounted in double shear, it's smart to use a large washer
on the outboard side. Otherwise, on impact the ball may rip out of its socket.

Lotus' distinctive perforated scuttle, but with a flat top for a change.
Note also the period-correct Intertech steering wheel.

Early 61s had a bulge in their bodywork for extra hand room around the gear selector.

As with the Lotus 51, Lotus 61 drivers rest their heals on a strip a steel.

A large photo of a Lotus 61 painted pale olive green with a mustard yellow stripe dominated
the January 10, 1969 cover of Autosport Magazine, "Britain's Motor Sporting Weekly".
The tagline read simply: "Win this new Lotus FF - European Rally Survey".
One has to wonder if giving cars away was an effective strategy for Lotus.

With these remotely mounted reservoirs, brake and clutch fluid levels are easier to check,
but not really easier to top off. Be careful. Any leaks or spills might end up on the driver.


All photos shown here are from April 2010 when we viewed the car at VRG's Jefferson 500 at Summit Point Motorsports Park, West Virginia. Photos by Curtis Jacobson for BritishRaceCar.com, copyright 2011. All rights reserved.


Notice: all the articles and almost all the photos on BritishRacecar.com are by Curtis Jacobson.
(Photos that aren't by Curtis are explicitly credited.) Reproduction without prior written permission is prohibited.
Contact us to purchase images or reproduction permission. Higher resolution images are optionally available.